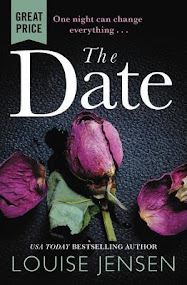 Something bad has happened to Alison Taylor. Her Saturday night started normally. Recently separated from her husband, Ali has been persuaded by her friends to go on a date with a new man. She is ready, she is nervous, she is excited. She is about to take a step into her new future. By Sunday morning, Ali’s life is unrecognizable. She wakes, and she knows that something is wrong. She is home, she is alone, she is hurt and she has no memory of what happened to her. Worse still, when she looks in the mirror, Ali doesn’t recognize the face staring back at her. She can’t recognize her friends and family. And she can’t recognize the person who is trying to destroy her…

A girl can't remember what happened to her one night.

I love thrillers. A good thriller will keep me guessing all the way until the end. The Date did just that. While I read thrillers really well and can usually guess who did what The Date had a bunch of twists that I did not expect coming. Yes, I still guessed some of the twists but there were still a lot of twists that I did not see coming and I applaud the author for fooling me and keeping me utterly entertained.
I had never read any books by the author before and now I want to pick up some more of her thrillers because Louise Jensen really knows how to write and keep you on your toes. I felt so bad for the main character Alison throughout the novel. She has a rare disorder where she cannot recognize faces, not even her own which made for a very interesting thriller and all the more suspenseful.
I was up late at night reading this book because I needed to know what happened to Alison. The beginning was kind of slow to get into but once I got the characters down and realized that Alison was an unreliable narrator because she couldn't recognize faces I started to breeze through the book. The transitions between different timelines at times got a little confusing but overall once I got farther into the book it all started to make sense. Plus, that cliffhanger at the end was EVERYTHING!!!
You literally suspect every character in this book is the culprit at some point. Alison even has a family mystery that she is hiding. The ultimate question is who harmed Ali one night. There are several chapters that are in Ali's captor's point of view which made for a chilling edition to the novel and made the story that much better.
I really enjoyed this thriller and can't wait to read more from this author. Four huge stars from this book nerd. If you like fast-paced thrillers then give this one a try. 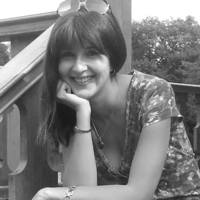 When I was little I was obsessed by Enid Blyton. Her characters were so real to me they became my friends. I often huddled under my covers, stifling my yawns and straining my eyes, as I read 'just one more page' by torchlight. Mr. Townsend, my primary school English teacher always encouraged my love of literature, and it wasn’t long before I’d read everything my school had to offer. The first book I created was six pages long, had stick-man illustrations, and was sellotaped together. I was immensely proud of it. Writing was a huge part of my life, until one day it wasn’t. I can’t remember ever making a conscious decision to stop writing but it became easier to act on the advice I was given - ‘grow up and get a proper job’ - and my dreams were tightly packed away, gathering dust for the next twenty years. My thirties were a car crash. Literally. I sustained injuries which when coupled with a pre-existing condition forced me to radically change my lifestyle. I felt utterly lost and utterly alone. Always an avid reader I began to devour books at an alarming rate. ‘You’ll have read every book in here soon,’ my local librarian said. ‘You’ll have to write your own.’ And there was a flicker, a shift, a rising of hope. I grasped that nugget of possibility and I wrote. I wrote when I was happy. I wrote when I was sad. I wrote when I was scared and in-between writing, I read, read and read some more. Words have the power to lift, to heal. They have illuminated my world, which for a time became very dark. As Anne Frank said ‘I can shake off everything as I write; my sorrows disappear, my courage is reborn.’