The tag was originally created from Mandy @ Book Princess Reviews and her blog name makes me smile. How perfect is this tag though?

Mushu from Mulan/Olaf + Sven from Frozen

Bridget Jones, from Bridget Jone's Diary by Helen Fielding! She is hilarious and laugh out loud funny! I love how she tracks her weight and how many cigarettes she has smoked in her diary. She's a mess but that's why as readers we love her soooo much. I relate to her on so many levels. Her awkwardness and desire for love is me to a T.

The Seven Dwarfs from Snow White

The Cullen's from the Twilight series! I love all the vampires so much. To this day my old teenage self smiles thinking about them. I can't help but still adore them as an adult. Especially Alice and Rosalie. They have always been my favorites. My favorite part of the book is still the story about how Rosalie changed from a human to a vampire.

The Loyal Cheerleader Chameleon (Not a Frog, Flynn Rider)

I picked up The Outliers by Kimberly McCreight because I thought the premise sounded cool and I loved the cover. I didn't know anything about the author or really much about the series. I wanted to love it so bad because it's a young adult thriller but this one turned out bad and I mean really bad. I only gave it one star and it just kept getting worse. I had no idea what was going on half the time it almost became laughable. This book didn't know if it wanted to be a thriller or a science fiction novel.

Name a Plot Twist That You Did Not See Coming

The ending of We Were Liars by E. Lockhart. I won't spoil it for you but let me just say WOW!!!! I actually cried with this one. This book is so touching. I cannot stop thinking about it to this day. It's one of my favorites and easily a five star read for me. It's amazing.

Rajah from Aladdin / Flounder from The Little Mermaid

Gentle With Their Princess But Protective With Everyone Else

Name Your Favorite Best Friend in a Novel

Idgie and Ruth in Fried Green Tomatoes at the Whistle Stop Cafe by Fannie Flagg. Idgie and Ruth have the best relationship and are always looking after one another. Their bond spreads many decades and love each other unconditionally.

Louis from The Princess and the Frog / Sebastian from The Little Mermaid / Cogsworth, Lumiere, Mrs. Potts, & Chip from Beauty and the Beast

If I Stay by Gayle Forman, the main character Mia is a very talented teenage cellist. During the novel, she waits to hear back from Julliard to see if she will get in for college. Music in her family is very important. Her boyfriend also plays in a band. Music is incorporated throughout the whole book.

The Obstacle in Flynn Rider’s Way

Name a Character That Faces a Lot of Obstacles

In White Oleander by Janet Fitch, the main character Astrid is only twelve when she is separated from her mother and sent to live in various different foster homes. She has a very tough upbringing. Despite her situation, Astrid makes the most out of life and turns out okay. The story goes through all the different homes she had to live in over the years. She is one tough girl that makes the most out of life.

Favorite Family Dynamics in a Novel

Little Women by Louisa May Alcott. I love the March sisters and their bond. This is how a family should be. The way they all look after each other even when they fight just warms my heart. This is a classic novel for a reason!

Book That Most Impacted Your Life

My favorite book of all time, To Kill A Mockingbird by Harper Lee. This book opened my mind to racism when I was younger and had such a huge impact on me growing up. My favorite literary father of all time is Atticus Finch.

I could go on and gush about this novel for pages. Don't even get me started. This book grew my obsession with reading and the literary world. I never get tired of reading this book. I love you, Boo Radley.

Name a Character That Steals the Show

I think Eowyn from The Lord of the Rings Trilogy by J.R.R. Tolkien deserves her own novel. She's fierce and such a badass! Girl Power here!! "I am no man!" is still one of my favorite quotes. Gosh, I love her so much.

Name Your Favorite or Worst Opposite Attracts Pairing

Tom and Daisy from The Great Gatsby. Tom is constantly cheating on his wife. While Gatsby is across the lake waiting for Daisy to return to him. Daisy refuses to leave her husband even though she's clearly unhappy and in love with someone else. It's almost as if she doesn't care. She refuses to be happy almost. I get that she doesn't want to create drama or have people gossiping about her but still, it's almost sickening.

Well, there you have it! Another tag is done. Do you agree with any of my answers above? Who is your favorite Disney Sidekick? I personally love my girl Tink! She's my favorite Disney Character. Always has been. This is the very reason why I named my dog after her.
I’m tagging:
sometimesleelynnreads
thatbookgal
wordswithrach0
thereadingchemist
and anyone else who wants to do this tag! Let me know below if you did. I would love to read your posts when you do them. 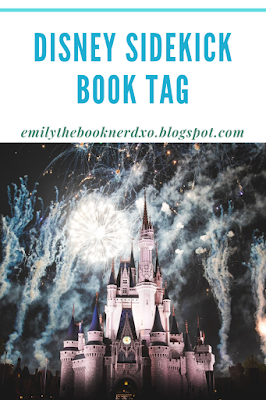