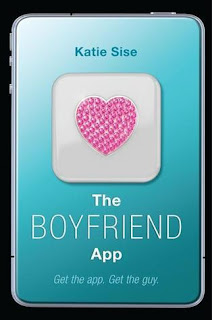 Get the app. Get the guy. Computer-whiz Audrey McCarthy feels most at home in a tech lab, surrounded by her fellow geeks. Once popular and fearless, she hasn't been the same since her dad died. And her ex-best friend, gorgeous queen bee Blake Dawkins, has turned into her worst nightmare. Audrey is counting the minutes until high school is over and she can get the hell out of Dodge and go to college-that is, if she can find a scholarship. So when Public Corporation, a giant tech company, announces a contest for the best app developed by a high schooler-with $200,000 in prize money-Audrey is spurred to action. She comes up with an idea so simple, yet so brilliant, she can't believe it hasn't been done: the Boyfriend App. With a simple touch of the screen, romance blooms among the unlikeliest couples in high school, and people start to take notice. But it's not quite enough. To beat out the competition, Audrey will have to dig deeper. And she does-right into a scandal that would rock Public to its core. Suddenly the Boyfriend App lands Audrey where she never expected to be: in the middle of the limelight, passionately kissed by the hottest guys in school, causing complete and utter mayhem. But can it bring her true love?

A girl creates an app where girls can find a boyfriend.

I picked up The Boyfriend App knowing absolutely nothing about it because of the cute cover. I am all for cheesy young adult novels. However, this book went into an entirely different direction and not for the better. There are many things that bothered me about this novel. It was so utterly infuriating to me that finishing it was painful, to say the least. The novel centers around the main character Audrey, who has never had a real boyfriend before. So, she creates an app that finds your perfect match after answering a series of questions. Whenever you become close to your match the app is supposed to go off.

Then out of nowhere and I mean nowhere the book turned into some weird government conspiracy plot! That somehow ends up working out in the end. The Boyfriend App was the most unrealistic book that I have read in a long time. The conspiracy made absolutely no sense in the context of the book. The plot was choppy. The character's voices were annoying... especially Audrey's. She was the most clueless and dumb character that I have read in awhile. I felt no close connection to the characters or plot. I could care less about them. The romance was blah. Whether they got together in the end or not I didn't care.

The Boyfriend App questioned consent but in a horrible way. It made me feel sick in my stomach several times. The issue was never even addressed. Basically, if the girl presses it's on in the app the boy will instantly fall in love with the girl and basically attack her kissing her etc. The boy will follow any instructions the girl gives him and will do anything. How is this okay? It's not. Girls controlling boys are just as equally horrible as boys taking advantage of girls. This was an absolutely horrible concept. The whole time I felt very uncomfortable.

I am surprised that I even finished this book. It made me extremely mad. If roles were reversed where guys could make girls do whatever they wanted... I am pretty sure this book would have never come out. The idea of sexual consent is a huge book topic and it needs to be addressed properly. It's a touchy subject. I personally felt offended at times. There was no disclaimer at the end or within the plot. Consent was never even questioned.

I would never recommend this book to anyone. As I am writing this, I am having a hard time thinking about what I read. No hard feelings to the author but what was she thinking about writing this? I will not be continuing the series or picking up another book by this author. Thank the lord that I am done reading this book.

Katie Sise is an author, jewelry designer, and television host. Lucky magazine has called her a "Designer to Watch," and her company has appeared in most major fashion magazines, including Vogue, W, Elle, Self, and many more. Katie is the author of The Academy, The Pretty App, The Boyfriend App and Creative Girl: The Ultimate Guide for Turning Talent and Creativity into a Real Career.