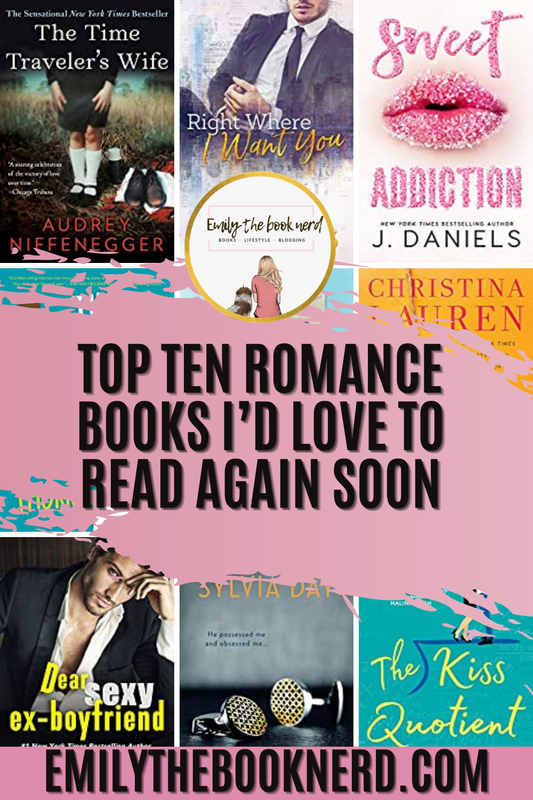 I haven't done a Top Ten Tuesday in a long time and thought I would finally do one. This week’s topic is Books I Want to Read Again, so I decided to put my own spin on the topic and make it into romance books that I would love to read again soon because your girl is a romance junkie.

Lately, I have been gearing my blog mostly towards the romance genre. Since my blog is geared to all things girly! 💜

Top Ten Tuesday is hosted by thatartsyreadergirl.com if you would like to participate each week and read some more blog posts geared to the theme go check her site out. They are some of my favorite posts personally to read.

3. The Last Song by Nicholas Sparks

Seventeen-year-old Veronica 'Ronnie' Miller’s life was turned upside-down when her parents divorced and her father moved from New York City to Wilmington, North Carolina. Three years later, she remains angry and alienated from her parents, especially her father . . . until her mother decides it would be in everyone’s best interest if she spent the summer in Wilmington with him. Ronnie’s father, a former concert pianist and teacher, is living a quiet life in the beach town, immersed in creating a work of art that will become the centerpiece of a local church.The tale that unfolds is an unforgettable story about love in its myriad forms - first love, the love between parents and children - that demonstrates, as only a Nicholas Sparks novel can, the many ways that deeply felt relationships can break our hearts . . . and heal them.

4. Right Where I Want You by Jessica Hawkins

There’s a thin line between love and hate . . . and it cuts right through the middle of their office.

Bad boys? They run right over good girls like Georgina Keller. But after a confidence-shattering breakup, she’s determined not to let anyone at her new workplace push her around—least of all the brooding creative director, a “bad boy of publishing” who’s made it clear she’s enemy #1.

Sebastian Quinn's taste for fast cars, late nights, and beautiful women may have gotten him to the top of a leading New York magazine, but the reputation that made him is suddenly threatening to end his career.

Georgina can help Modern Man shed its bad reputation, but in order to do that, she’ll have to start at the top—and no amount of rakish charm or inconvenient attraction will distract her.

Because if Sebastian gets her right where he wants her, it means she’s going down.

Wedding hookups never amount to anything.Those who partake in this wicked little activity know the rules. Get in. Get laid. Get out. There's no expectation of a relationship. It is what it is.Dylan Sparks knows the rules. She’s familiar with the protocol. And she engages in the best sex of her life with a complete stranger at her ex-boyfriend’s wedding.Reese Carroll doesn’t care about the rules. He wants more than just one night with Dylan.And Dylan finds him too addicting to pass up.Sweet Addiction is the story of one woman’s struggle to keep things casual, and one man’s desire to never let her go.

6. The Kiss Quotient by Helen Hoang

A heartwarming and refreshing debut novel that proves one thing: there's not enough data in the world to predict what will make your heart tick.Stella Lane thinks math is the only thing that unites the universe. She comes up with algorithms to predict customer purchases — a job that has given her more money than she knows what to do with, and way less experience in the dating department than the average thirty-year-old.It doesn't help that Stella has Asperger's and French kissing reminds her of a shark getting its teeth cleaned by pilot fish. Her conclusion: she needs lots of practice — with a professional. Which is why she hires escort Michael Phan. The Vietnamese and Swedish stunner can't afford to turn down Stella's offer, and agrees to help her check off all the boxes on her lesson plan — from foreplay to more-than-missionary position...Before long, Stella not only learns to appreciate his kisses, but to crave all the other things he's making her feel. Soon, their no-nonsense partnership starts making a strange kind of sense. And the pattern that emerges will convince Stella that love is the best kind of logic...

8. The Hating Game by Sally Thorne

Nemesis (n.) 1) An opponent or rival whom a person cannot best or overcome.
2) A person’s undoing
3) Joshua Templeman

Lucy Hutton has always been certain that the nice girl can get the corner office. She’s charming and accommodating and prides herself on being loved by everyone at Bexley & Gamin. Everyone except for coldly efficient, impeccably attired, physically intimidating Joshua Templeman. And the feeling is mutual.

Trapped in a shared office together 40 (OK, 50 or 60) hours a week, they’ve become entrenched in an addictive, ridiculous never-ending game of one-upmanship. There’s the Staring Game. The Mirror Game. The HR Game. Lucy can’t let Joshua beat her at anything—especially when a huge new promotion goes up for the taking.

If Lucy wins this game, she’ll be Joshua’s boss. If she loses, she’ll resign. So why is she suddenly having steamy dreams about Joshua, and dressing for work like she’s got a hot date? After a perfectly innocent elevator ride ends with an earth-shattering kiss, Lucy starts to wonder whether she’s got Joshua Templeman all wrong.

Maybe Lucy Hutton doesn’t hate Joshua Templeman. And maybe, he doesn’t hate her either. Or maybe this is just another game.

9. Bared To You by Sylvia Day

From #1 New York Times bestselling author Sylvia Day comes the provocative masterstroke of abandon and obsession that redefined the meaning of desire and became a global phenomenon...
Gideon Cross came into my life like lightning in the darkness. He was beautiful and brilliant, jagged and white-hot. I was drawn to him as I'd never been to anything or anyone in my life. I craved his touch like a drug, even knowing it would weaken me. I was flawed and damaged, and he opened those cracks in me so easily.
Gideon knew. He had demons of his own. And we would become the mirrors that reflected each other's most private wounds and desires.
The bonds of his love transformed me, even as I prayed that the torment of our pasts didn't tear us apart.

Let me just say -- none of this was supposed to happen.

I didn't expect the letter to go viral. I didn't think anyone would figure out who Dear Sexy Ex was. And I especially never thought he would find out about it.

Yeah, bit of a miscalculation there.

But see, I need the money to fund my brand new venture. And Dear Sexy Ex, well, it turns out he needs me to save his business.

By becoming his fake fiancée.

Yup, that's the pickle I find myself in -- pretending to be madly in love with the charming, brilliant, and utterly infuriating man known as Dear Sexy Ex.

Only, it's not an act. And he can never know.

Have you read any of the books above? What did you think of them? What books would you like to read again? Do you have any romance books that you would like to recommend to me? I am always looking for more books to read.
xoxo,