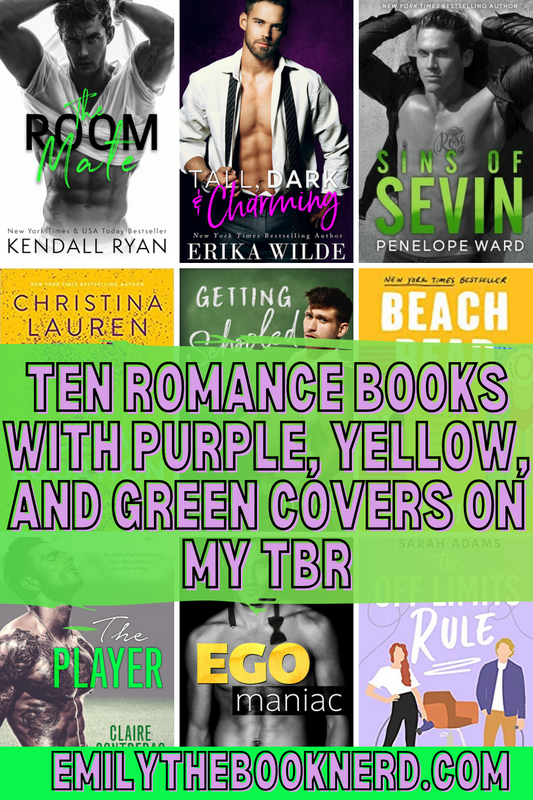 I am late on this post for Top Ten Tuesday this week but hey at least I am getting it in rather than not getting to it at all this week. This has been one of the hardest months emotionally for me. Not to mention, I have been slammed with college homework this week. Therefore, my blog posts were kind of lacking this week because school is super important. Homework comes first. 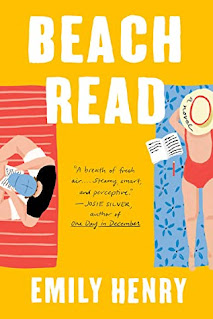 A romance writer who no longer believes in love and a literary writer stuck in a rut engage in a summer-long challenge that may just upend everything they believe about happily ever afters.Augustus Everett is an acclaimed author of literary fiction. January Andrews writes bestselling romance. When she pens a happily ever after, he kills off his entire cast.They're polar opposites.In fact, the only thing they have in common is that for the next three months, they're living in neighboring beach houses, broke, and bogged down with writer's block.Until, one hazy evening, one thing leads to another and they strike a deal designed to force them out of their creative ruts: Augustus will spend the summer writing something happy, and January will pen the next Great American Novel. She'll take him on field trips worthy of any rom-com montage, and he'll take her to interview surviving members of a backwoods death cult (obviously). Everyone will finish a book and no one will fall in love. Really.

2. Sins of Sevin by Penelope Ward 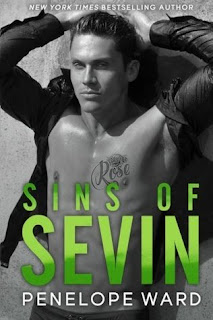 From New York Times bestselling author Penelope Ward, comes a new forbidden STANDALONE romance.What happens when the one you want is the only one you can’t have?My name is Sevin.Homeschooled and sheltered by my ultra-religious family, I was always taught that lust was a sin.Elle was the girl who’d been carefully chosen for me.After a long-distance courtship, I’d be moving into her family’s guesthouse so that we could get to know each other in the months before the wedding.Boundaries were set: no inappropriate touching, no kissing, no sex before marriage.I’d accepted those rules and my fate.Until I met the one I wanted to sin with.That was when restraint became a problem…especially since THE ONE wasn’t Elle.It was her sister, Evangeline.You know what they say about best laid plans.My name is Sevin, and I have sinned.**Told in alternating points of view, Sins of Sevin is a full-length standalone novel. Contains graphic sexual content and harsh language. Only appropriate for adult readers age 18+.

3. The Off Limits Rule by Sarah Adams 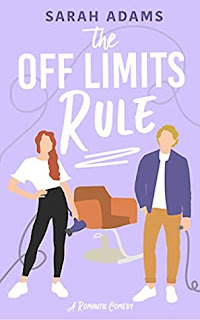 I have found rock bottom. It’s here, moving in with my older brother because I’m too broke to afford to live on my own. It’s okay though, because we’ve always been close and I think I’m going to have fun living with him again.That is until I meet Cooper…Turns out, my brother has very strong opinions on the idea of me dating his best friend and is dead set against it. According to him, Cooper is everything I should stay away from: flirtatious, adventurous, non-committal, and freaking hot. (I added that last part because I feel like you need the whole picture.) My brother is right—I should stay away from Cooper James and his pretty blue eyes. He’s the opposite of what I need right now.Nah—who am I kidding? I’m going for it. 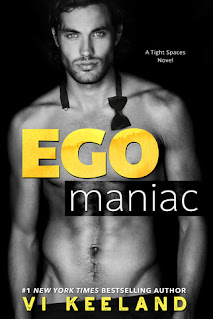 The night I met Drew Jagger, he’d just broken into my new Park Avenue office. I dialed 9-1-1 before proceeding to attack him with my fancy new Krav Maga skills.  He quickly restrained me, then chuckled, finding my attempted assault amusing.    Of course, my intruder had to be arrogant. Only, turned out, he wasn’t an intruder at all.    Drew was the rightful occupant of my new office. He’d been on vacation while his posh space was renovated. Which was how a scammer got away with leasing me office space that wasn’t really available for rent. I was swindled out of ten grand.  The next day, after hours at the police station, Drew took pity on me and made me an offer I couldn’t refuse. In exchange for answering his phones while his secretary was out, he’d let me stay until I found a new place. I probably should have acted grateful and kept my mouth shut when I overheard the advice he was spewing to his clients. But I couldn’t help giving him a piece of my mind. I never expected my body to react every time we argued. Especially when that was all we seemed to be able to do.  The two of us were complete opposites. Drew was a bitter, angry, gorgeous-as-all-hell destroyer of relationships. And my job was to help people save their marriages. The only thing the two of us had in common was the space we were sharing. And an attraction that was getting harder to deny by the day. 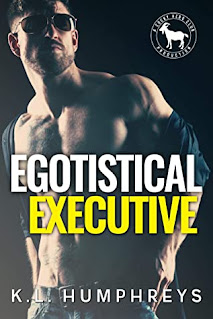 Who does he think he is? What an Egotistical Executive!Melanie Karlson’s day just took a nosedive when gorgeous and confident Eli Egan walks into her coffee shop.He’s demanding, conceited and thinks he’s god’s gift to women.After he leaves, she can breathe again thinking it was a one and done situation. Except it's not.A chance encounter leads to a dinner date that neither of them will forget. For more reasons than one.Even though she despises him, he still manages to get under her skin and into her bed.What happens when he leaves her with more than a lasting impression? Will she be able to find her Egotistical Executive?

6. The Player by Claire Contreras 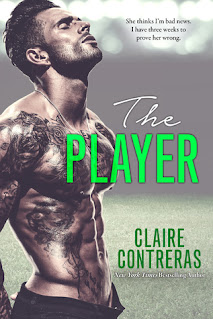 I'm naturally gifted on the field and between the sheets. With flashy cars and enough media attention to put the Royal Family to shame, I’m the definition of Most Eligible Bachelor.I've never met a man who doesn't want to be me or a woman who doesn't want to tame me. Until I meet Camila.From the moment I lay eyes on her, I know I have to have her.She wants to keep me at arm's length.I want her naked in my bed.She thinks our worlds are too different.All I want her to think about is screaming my name.She says I’m bad news.I have three weeks to prove her wrong.

7. The Room Mate by Kendall Ryan 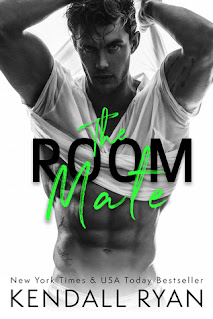 The last time I saw my best friend’s younger brother, he was a geek wearing braces. But when Cannon shows up to crash in my spare room, I get a swift reality check.

Now twenty-four, he’s broad shouldered and masculine, and so sinfully sexy, I want to climb him like the jungle gyms we used to enjoy. At six-foot-something with lean muscles hiding under his T-shirt, a deep sexy voice, and full lips that pull into a smirk when he studies me, he’s pure temptation.

Fresh out of a messy breakup, he doesn’t want any entanglements. But I can resist, right?

I’m holding strong until the third night of our new arrangement when we get drunk and he confesses his biggest secret of all: he’s cursed when it comes to sex. Apparently he’s a god in bed, and women instantly fall in love with him.

I’m calling bullshit. In fact, I’m going to prove him wrong, and if I rack up a few much-needed orgasms in the process, all the better.

There’s no way I’m going to fall in love with Cannon. But once we start... I realize betting against him may have been the biggest mistake of my life.

THE ROOM MATE is a full-length standalone romance.

8. The Soulmate Equation by Christina Lauren 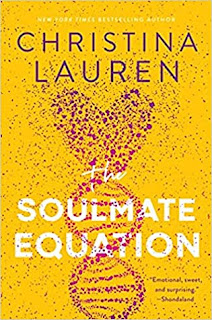 The New York Times bestselling author of The Unhoneymooners returns with a witty and effervescent novel about what happens when two people with everything on the line are thrown together by science--or is it fate? Perfect for fans of The Rosie Project and One Plus One.Single mom Jess Davis is a data and statistics wizard, but no amount of number crunching can convince her to step back into the dating world. Raised by her grandparents--who now help raise her seven-year-old daughter, Juno--Jess has been left behind too often to feel comfortable letting anyone in. After all, her father's never been around, her hard-partying mother disappeared when she was six, and her ex decided he wasn't "father material" before Juno was even born. Jess holds her loved ones close, but working constantly to stay afloat is hard...and lonely.But then Jess hears about GeneticAlly, a buzzy new DNA-based matchmaking company that's predicted to change dating forever. Finding a soulmate through DNA? The reliability of numbers: This Jess understands. At least she thought she did, until her test shows an unheard-of 98% compatibility with another subject in the database: GeneticAlly's founder, Dr. River Pena. This is one number she can't wrap her head around, because she already knows Dr. Pena. The stuck-up, stubborn man is without a doubt not her soulmate. But GeneticAlly has a proposition: Get to know him and we'll pay you. Jess--who is barely making ends meet--is in no position to turn it down, despite her skepticism about the project and her dislike for River. As the pair are dragged from one event to the next as the "Diamond" pairing that could make GeneticAlly a mint in stock prices, Jess begins to realize that there might be more to the scientist--and the science behind a soulmate--than she thought.Funny, warm, and full of heart, The Soulmate Equation proves that the delicate balance between fate and choice can never be calculated.

9. Getting Schooled by Emma Chase 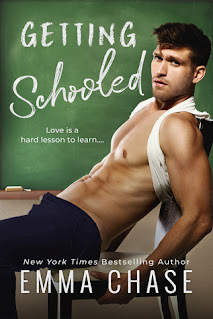 Head of the class...

Garrett Daniels has this whole life thing figured out.

The cocky, charismatic former high school star quarterback is an idolized football coach and "cool" teacher in the hometown where he's not just a golden boy—he's platinum. He has good friends, a great house on the lake, and the best damn sidekick a man could ask for: Snoopy, the albino beagle.

And knocks him right on his tight end zone.

Callie has a pretty sweet life herself...on the other side of the country. But circumstances—that she'd prefer to never speak of again—have brought her back home, helping out her parents and substitute teaching at her old high school.

When Garrett offers to show his former high school sweetheart the secrets of his winning teacher ways, Callie jumps at the chance—and then has to stop herself from jumping him.

Good friends are all they can ever be. 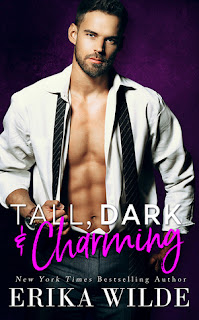 Aiden Stone loves life as a bachelor and has no intentions of settling down anytime soon. He has a great job and a career he enjoys, and women adore him... except for Daisy Parker, who doesn't seem fazed by his flirtatious attempts or the sexy smile that normally has panties dropping to the floor. She's a tougher nut to crack, but the fact that she seems immune to his charm only fascinates him more... until one hot unexpected encounter with her blows his mind and gives them both more than just a night of pleasure. Because Daisy is now his baby momma, and his life is about to change in ways he'd never anticipated.

Are any of these books on your TBR?
Have you read any of the books above?
xoxo,