Dorothy In the Land of Monsters Book Blitz 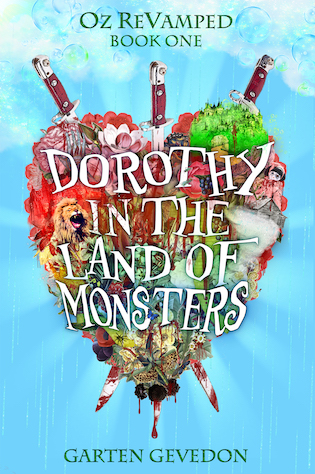 
Shifters, Zombies, and Vampires? Oh my!
My name is Dorothy Gale, and I think I might be dead.
When my dog Toto and I got swept up in a twister, we landed in hell. A very colorful hell. Like a rainbow dripping in blood. Now it looks as though this dreadful underworld plagued with vampires, zombies, and shifters will be the site of my eternal damnation.
They say this terrifying land called Oz isn’t hell or purgatory and escape is possible, but first I must survive the journey down the blood-soaked yellow brick road to the only place in Oz where vampires dare not tread—The City of Emeralds.
With enchanted footwear and the help of my three new friends—a friendly zombie, a massive shifter lion, and a heartless axe murderer of evil night creatures (who also happens to be the hottest guy I’ve ever seen)—Toto and I have a chance to make it to the Vampire Free Zone. When we get there, I must convince the most powerful wizard in this magical land of monsters to send us out of this radiant nightmare and back to the world of the living. They say he’s just as frightening as this monstrous land, that he detests visitors, and even the most horrifying creatures cower in his presence. But I must seek him out. And when I find him, I’ll do whatever it takes to make him send me home.

Goodreads / Amazon / Barnes & Noble / iBooks / Kobo
—
EXCERPT:
Gray everywhere. As I stand on the porch of my aunt and uncle’s home, all I can see is the great gray expanse of prairie on every side. No trees, houses, buildings, people, nothing at all breaks the broad sweep of flat gray country that reaches to the edge of the gray sky in every direction. The sun scorched the plowed fields into a dusty, gray mass that expands to the horizon line, the endless gloom broken only by the little black shadows of the fissures running through it like the marbling of a corpse.
Even the grass is dead and gray—the hot sun singed the blades until they were the same lifeless gray color that blankets everything. Years ago, the house was a pristine white, but the torrid summer sun burned and blistered the paint and the heavy winter rains battered it away, and now the house is as weathered and gray as everything else here. It’s fitting for what it’s like to live here in Middle of Nowhere, Kansas. It looks like what it is—bleak, leached of any color, any excitement, anything interesting at all—drained of life. Gray is gray is gray is my life. It surrounds me from all sides, all the time. And it sucks. Thanks a lot, climate change.
I came to live with my Uncle Henry and Aunt Emily on a crappy little farm when my parents died in a car accident. I was thirteen. Because Emily was the only family I had left, she got stuck with me. She could have refused me and left me as a ward of the state, but she was kind enough to take me in. Even though I don’t share the same connection with Emily and Henry that I did with my parents, they’re still family—the only family I have—so, I may complain about this being the middle of nowhere, but it’s better than being in an orphanage or foster care or some group home. Yeah, their place is tiny, and old, but at least it has four walls, a floor, and a roof.
The two-bedroom farmhouse I live in is as weathered and brittle as the farm it’s set on. One story with no attic and no basement, the only feature it has is a cyclone cellar which we’ve had yet to use since I’ve lived here. It may lack color and any of the luxuries most people in America have these days—cable, wifi, consistent hot water to shower with—but I am grateful I have somewhere to live, even if life here is so gray that the grayness proliferates, turning everything in it to a gray as dry as dust.
When Aunt Emily came here to live with Uncle Henry, she was a young, pretty, vivacious woman with golden hair and bright emerald green eyes—or I thought I remembered her that way. Even she’s gray now. Just like it changed this once green land, the sun and wind have changed her, and her once sparkling green eyes are now dim and muted, tinged with a melancholy gray. Living here in this sweltering, exanimate world has stolen her radiance and left her ashen. It’s exhausted the red from her cheeks and lips, and now they’re pallid and gray too. Once she was curvy and a little plump. Now she’s gaunt and never smiles. Can’t blame her for never smiling, living in this dull, gray crap hole.
When I first came to her, Aunt Emily would startle when I laughed. She’d scream and look at me like I was nuts, shocked I could find anything to laugh at in this gray place. Uncomfortable and bored out of my skull, I’d laugh trying to entertain myself, trying not to let the depression get the best of me, but after being here for four years, I get it now—what is there to laugh about when all that’s here is gray?
Uncle Henry never laughs either. Morning to night, all he does is work hard. If he knows what joy is, he doesn’t let on. From his gray beard to his rough boots, Henry is also gray, stern, and solemn. With a permanent stone face, he almost never speaks. It’s like he’s made of hard, gray stone. If he didn’t work so much trying to make this gray land yield something, I’d think he was stone—a gray statue of a man.
Sometimes I wonder if it’s me that’s gray, or the lens I see the world through. Before my parents died, my life was a bright white, like a pristine sheet of paper wishing for a colorful story to grace its surface. Then the black smear of tragedy struck, and it’s as though the thousands of tears I shed diffused the black that blemished my bright whiteness, spreading it over the unsullied parts like watercolor, leaving my world gray. But I don’t think I’m gray. Not yet. I don’t think it has spread to me yet.
—“Dorothy in the Land of Monsters” Oz ReVamped #1
Chapter 1 – The Cyclone, pgs. 1-2

Author Bio:
Garten Gevedon lives in New York City with her family. She's a sci-fi, fantasy, and paranormal author who loves taking fairy tales and turning them inside out. You can visit her online at www.gartengevedon.com.