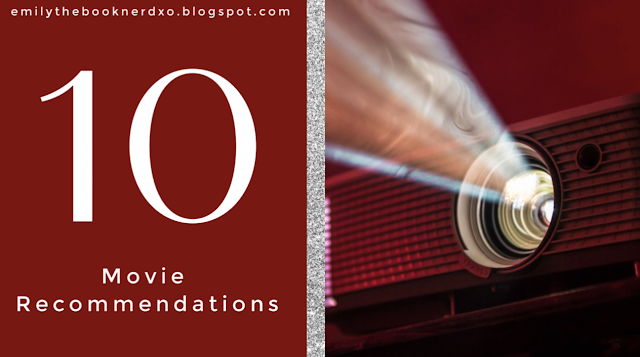 Movies like books are essential in my life. I love movies almost as much as books. I would for sure call myself a movie buff. I watch movies from every era. Sometimes, even in black and white! A good movie can make my day better. Just like reading, giving movie recommendations makes me smile. Your girl felt inspired and I decided to compile a list of some of my favorite movies to add to your personal watch list! If you haven't seen any of these movies they are a must-see. I decided to introduce a new blog series. Here is part one of my movie recommendations!

James Cameron's "Titanic" is an epic, action-packed romance set against the ill-fated maiden voyage of the R.M.S. Titanic; the pride and joy of the White Star Line and, at the time, the largest moving object ever built. She was the most luxurious liner of her era -- the "ship of dreams" -- which ultimately carried over 1,500 people to their death in the ice-cold waters of the North Atlantic in the early hours of April 15, 1912.

In 1940s South Carolina, mill worker Noah Calhoun (Ryan Gosling) and rich girl Allie (Rachel McAdams) are desperately in love. But her parents don't approve. When Noah goes off to serve in World War II, it seems to mark the end of their love affair. In the interim, Allie becomes involved with another man (James Marsden). But when Noah returns to their small town years later, on the cusp of Allie's marriage, it soon becomes clear that their romance is anything but over.

The Hoover family -- a man (Greg Kinnear), his wife (Toni Collette), an uncle (Steve Carell), a brother (Paul Dano) and a grandfather (Alan Arkin) -- puts the fun back in dysfunctional by piling into a VW bus and heading to California to support a daughter (Abigail Breslin) in her bid to win the Little Miss Sunshine Contest. The sanity of everyone involved is stretched to the limit as the group's quirks cause epic problems as they travel along their interstate route.

A telesales operative becomes disillusioned with his existence and begins to hunger for fresh excitement in his life. As he experiences a new awakening of the senses, his wife and daughter also undergo changes that seriously affect their family. Critically acclaimed, this film won Oscars for Best Screenplay, Best Director, Best Actor, and Best Film.

After learning that a stranger has been accidentally killed near their rural homes, four Oregon boys decide to go see the body. On the way, Gordie Lachance (Wil Wheaton), Vern Tessio (Jerry O'Connell), Chris Chambers (River Phoenix) and Teddy Duchamp (Corey Feldman) encounter a mean junk man and a marsh full of leeches, as they also learn more about one another and their very different home lives. Just a lark at first, the boys' adventure evolves into a defining event in their lives.

An old-fashioned yarn about a band of adventurous kids who take on the might of a property developing company which plans to destroy their home to build a country club. When the children discover an old pirate map in the attic, they follow it into an underground cavern in search of lost treasure but come up against plenty of dangerous obstacles along the way.

Bill (Alex Winter) and Ted (Keanu Reeves) are high school buddies starting a band. However, they are about to fail their history class, which means Ted would be sent to military school. They receive help from Rufus (George Carlin), a traveler from a future where their band is the foundation for a perfect society. With the use of Rufus' time machine, Bill and Ted travel to various points in history, returning with important figures to help them complete their final history presentation.

Five high school students from different walks of life endure a Saturday detention under a power-hungry principal (Paul Gleason). The disparate group includes rebel John (Judd Nelson), princess Claire (Molly Ringwald), outcast Allison (Ally Sheedy), brainy Brian (Anthony Michael Hall) and Andrew (Emilio Estevez), the jock. Each has a chance to tell his or her story, making the others see them a little differently -- and when the day ends, they question whether school will ever be the same.

The songs of the Beatles provide the sonic framework for this musical tale of romance, war and peace. When young British worker Jude (Jim Sturgess) sets sail for the United States in search of his father, he ends up meeting carefree college student Max (Joe Anderson) and his lovely sister, Lucy (Evan Rachel Wood), along with a cast of eccentric characters. As Jude and Lucy fall for each other, their relationship is threatened by the social upheaval that accompanies the Vietnam War.

Impressed by high school student David's (Tobey Maguire) devotion to a 1950s family TV show, a mysterious television repairman (Don Knotts) provides him with a means to escape into the black-and-white program with his sister, Jennifer (Reese Witherspoon). While David initially takes to the simplistic, corny world of the show, Jennifer sets about jolting the characters with doses of reality that unexpectedly bring a little color into their drab existence.

I hope you found some new movies to try from this list! Stay tuned for part two coming at you shortly! What are some of your favorites from this list? I would love to know in the comments down below.
xoxo, 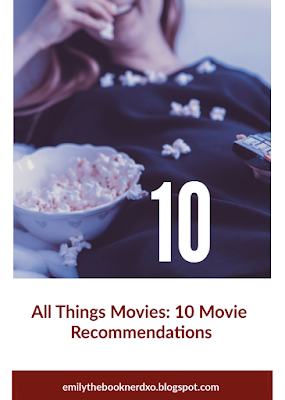