Stuart Duffelmeyer and the Masters of Plagues Book Blitz 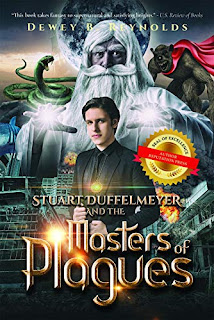 Stuart Duffelmeyer and the Masters of Plagues
Genre: Sci-Fi, Fantasy

Ever been bullied? How about badly mistreated? Meet Stuart Duffelmeyer. He knows what it feels like to be treated like trash. Brilliant, quiet, nerdy, and kind-spirited best describe him. He is an NYU student whose classmates target him for total humiliation. Fooling with him was their ultimate mistake. Stuart suffered severely as a result of their malicious behavior. He harnesses the power of nature to serve a dish of revenge that is best served cold to them.

Dewey B. Reynolds is an author, screenwriter, short filmmaker, and computer expert. He began writing short stories and poetry in high school. Several of his works have appeared in local and national magazines and newspapers. Mystery, Thriller, Sci-Fi Fantasy, and True Crime are the genres in which he writes in. Dewey currently lives in his hometown of Kansas City, Missouri.

Email ThisBlogThis!Share to TwitterShare to FacebookShare to Pinterest
Tags Giveaway