7 Amazing Books To Give As Gifts

It is the holiday season and with it comes gifting. A lot of times I have no idea what to get for people. I often resort to reading other blogs like mine to find ideas. You can never go wrong with giving a person a meaningful book. The best gifts that I have ever received are books and not just because I am a bookworm. Most have been very powerful and have affected my life in some way.

Here is a list of the top seven books to give as a gift this year:

1. To Kill A Mocking Bird by Harper Lee

Voted America's Best-Loved Novel in PBS's The Great American Read. Harper Lee's Pulitzer Prize-winning masterwork of honor and injustice in the deep South—and the heroism of one man in the face of blind and violent hatred. One of the most cherished stories of all time, To Kill a Mockingbird has been translated into more than forty languages, sold more than forty million copies worldwide, served as the basis for an enormously popular motion picture, and was voted one of the best novels of the twentieth century by librarians across the country. A gripping, heart-wrenching, and wholly remarkable tale of coming-of-age in a South poisoned by virulent prejudice, it views a world of great beauty and savage inequities through the eyes of a young girl, as her father—a crusading local lawyer—risks everything to defend a black man unjustly accused of a terrible crime.


2. The Glass Castle by Jeannette Walls

The Glass Castle is a remarkable memoir of resilience and redemption, and a revelatory look into a family at once deeply dysfunctional and uniquely vibrant. When sober, Jeannette’s brilliant and charismatic father captured his children’s imagination, teaching them physics, geology, and how to embrace life fearlessly. But when he drank, he was dishonest and destructive. Her mother was a free spirit who abhorred the idea of domesticity and didn’t want the responsibility of raising a family. The Walls children learned to take care of themselves. They fed, clothed, and protected one another, and eventually found their way to New York. Their parents followed them, choosing to be homeless even as their children prospered. The Glass Castle is truly astonishing—a memoir permeated by the intense love of a peculiar but loyal family.


3. So Here I Am: Speeches by Great Women to Empower and Inspire by Anna Russell

Inspiring female voices that have changed our world, and started a new conversation. So Here I Am brings together empowering speeches by women throughout history up to the present day. This is a celebration of women speaking up; within politics, science, human rights, TV and media - discussing everything from free love, anti-war, discoveries, race, gender and women's rights. With evocative and powerful illustrations from Brazilian artist, Camila Pinheiro, this anthology of great women -  whose own achievements speak for themselves - is timely and important. This shot of inspiration serves as a reminder that despite all adversity, nevertheless, she persisted.

4. Into The Wild by Jon Krakauer

In April 1992 a young man from a well-to-do family hitchhiked to Alaska and walked alone into the wilderness north of Mt. McKinley. His name was Christopher Johnson McCandless. He had given $25,000 in savings to charity, abandoned his car and most of his possessions, burned all the cash in his wallet, and invented a new life for himself. Four months later, his decomposed body was found by a moose hunter.  How McCandless came to die is the unforgettable story of Into the Wild. Immediately after graduating from college in 1991, McCandless had roamed through the West and Southwest on a vision quest like those made by his heroes Jack London and John Muir.  In the Mojave Desert, he abandoned his car, stripped it of its license plates, and burned all of his cash.  He would give himself a new name, Alexander Supertramp, and, unencumbered by money and belongings, he would be free to wallow in the raw, unfiltered experiences that nature presented.  Craving a blank spot on the map, McCandless simply threw the maps away.  Leaving behind his desperate parents and sister, he vanished into the wild. Jon Krakauer constructs a clarifying prism through which he reassembles the disquieting facts of McCandless's short life.  Admitting an interest that borders on obsession, he searches for the clues to the dries and desires that propelled McCandless. Digging deeply, he takes an inherently compelling mystery and unravels the larger riddles it holds: the profound pull of the American wilderness on our imagination; the allure of high-risk activities to young men of a certain cast of mind; the complex, charged bond between fathers and sons. When McCandless's innocent mistakes turn out to be irreversible and fatal, he becomes the stuff of tabloid headlines and is dismissed for his naiveté, pretensions, and hubris.  He is said to have had a death wish but wanting to die is a very different thing from being compelled to look over the edge. Krakauer brings McCandless's uncompromising pilgrimage out of the shadows, and the peril, adversity, and renunciation sought by this enigmatic young man are illuminated with a rare understanding--and not an ounce of sentimentality. Mesmerizing, heartbreaking, Into the Wild is a tour de force. The power and luminosity of Jon Krakauer's storytelling blaze through every page.

A New York Times bestseller and one of 2019's best-reviewed books, a poetic memoir and call to action from the award-winning author of Speak, Laurie Halse Anderson! Bestselling author Laurie Halse Anderson is known for the unflinching way she writes about, and advocates for, survivors of sexual assault. Now, inspired by her fans and enraged by how little in our culture has changed since her groundbreaking novel Speak was first published twenty years ago, she has written a poetry memoir that is as vulnerable as it is rallying, as timely as it is timeless. In free verse, Anderson shares reflections, rants, and calls to action woven between deeply personal stories from her life that she's never written about before. Described as "powerful," "captivating," and "essential" in the nine starred reviews it's received, this must-read memoir is being hailed as one of 2019's best books for teens and adults. A denouncement of our society's failures and a love letter to all the people with the courage to say #MeToo and #TimesUp, whether aloud, online, or only in their own hearts, SHOUT speaks truth to power in a loud, clear voice-- and once you hear it, it is impossible to ignore.


6. Every Heart a Doorway (Wayward Children Book 1) by Seanan McGuire

Eleanor West's Home for Wayward Children. No Solicitations. No Visitors. No Quests. Children have always disappeared under the right conditions; slipping through the shadows under a bed or at the back of a wardrobe, tumbling down rabbit holes and into old wells, and emerging somewhere... else. But magical lands have little need for used-up miracle children. Nancy tumbled once, but now she's back. The things she's experienced... they change a person. The children under Miss West's care understand all too well. And each of them is seeking a way back to their own fantasy world. But Nancy's arrival marks a change at the Home. There's a darkness just around each corner, and when tragedy strikes, it's up to Nancy and her new-found schoolmates to get to the heart of things. No matter the cost.

Kimberly Rae Miller is an immaculately put-together woman with a great career, a loving boyfriend, and a beautifully tidy apartment in Brooklyn. You would never guess that behind the closed doors of her family’s idyllic Long Island house hid teetering stacks of aging newspaper, broken computers, and boxes upon boxes of unused junk festering in every room—the product of her father’s painful and unending struggle with hoarding. In this dazzling memoir, Miller brings to life her experience growing up in a rat-infested home, hiding her father’s shameful secret from friends for years, and the emotional burden that ultimately led to her suicide attempt. In beautiful prose, Miller sheds light on her complicated yet loving relationship with her parents, which has thrived in spite of the odds. Coming Clean is a story about recognizing where you come from and understanding the relationships that define you. It is also a powerful story of recovery and redemption.

Have you read any of the books above? Are any of them on your to be read list? I personally have loved each and every one of them. You have to check them out. What is the best book that you have ever been gifted? 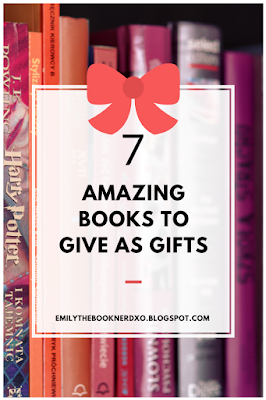