WOULD YOU RATHER TAG 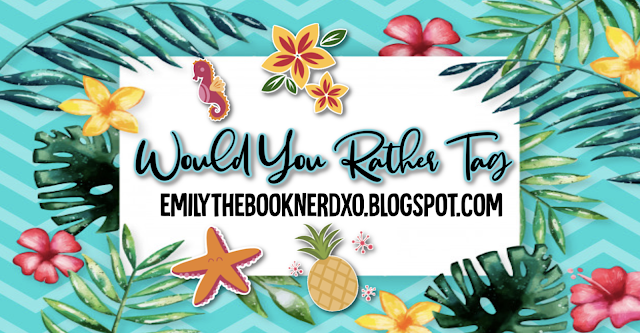 As I was browsing the blogosphere.. this tag popped out at me. I grabbed this tag from thevibrantdreamer. It sounded really fun. I love filling out these sorts of posts.

The game would you rather has always been a game that I have enjoyed since childhood. Trying to decide which you'd rather have can sometimes be hard. However, I love anything involving self-reflection.

#1: WOULD YOU RATHER HAVE THE ABILITY TO FLY OR BREATHE UNDERWATER?
I would totally love to be able to fly. Ever since I was a kid, I have always dreamed of doing so. I think it's because growing up... I always wanted to be a witch with magical powers. HAHA

#2: WOULD YOU RATHER LIVE ALONE FOREVER SURROUNDED BY ALL THE BOOKS YOU CAN READ OR SURROUNDED BY (TAME) ANIMALS?
Um, Books.... totally books. I would choose my dog in heartbeat though.

#3: WOULD YOU RATHER HAVE BIG FEET OR BIG HANDS?
Big feet? This is a weird question. I can hide my feet with shoes.

#4: WOULD YOU RATHER DRINK COFFEE OR TEA FOR THE REST OF YOUR LIFE?

Coffee all the way :)

#5: WOULD YOU RATHER BE HAIRLESS (AND I MEAN HAIRLESS, INCLUDING YOUR EYELASHES AND EYEBROWS) OR VERY HAIRY?
I think I would rather be hairy. I can shave. Having no eyelashes or eyebrows would be very weird.

#6: WOULD YOU RATHER HAVE UNLIMITED SUSHI FOR LIFE OR UNLIMITED TACOS FOR LIFE?

#7: WOULD YOU RATHER KNOW WHEN YOU ARE GOING TO DIE OR HOW YOU ARE GOING TO DIE? (YOU CAN’T CHANGE THE TIME OR METHOD OF YOUR DEATH) Knowing how would be more calming I think. It's the fear of the unknown that makes humans afraid of death. If we knew how maybe we wouldn't be as scared...

#9: WOULD YOU RATHER GET 1 FREE ROUND TRIP INTERNATIONAL PLANE TICKET EVERY YEAR OR BE ABLE TO FLY DOMESTIC ANYTIME FOR FREE?
1 international flight. There are way more things I would rather see in other countries.


#10: WOULD YOU RATHER BE TOOTHLESS OR GO BALD?
I would probably go bald because I could just get really nice wigs. They make beautiful ones these days. Having a nice smile is way more important to me.

#11 WOULD YOU RATHER LIVE SOMEWHERE IT ALWAYS SNOWS OR IT NEVER SNOWS?
Somewhere it always snows. I prefer to have seasons. I am also always hot.


#12 WOULD YOU RATHER ALWAYS TAKE PUBLIC TRANSIT OR ALWAYS HAVE TO BE THE DRIVER OF A VEHICLE?
Be the driver. I like driving and the idea of not being able to do that ever again makes me sad.

#14 WOULD YOU RATHER STOP SHAVING YOUR LEGS OR YOUR ARMPITS?
I hate shaving my legs. It takes a lot of time and I can just wear jeans. Hairy armpits are gross and cause body odor. So, I would stop shaving my legs.

#15 WOULD YOU RATHER BE PHYSICALLY UNABLE TO TOLERATE SUN OR RAIN?
I would be super sad if I could never see the sun again... So, I would have to pick the rain. I could still watch the rain.

#16 WOULD YOU RATHER HAVE ENOUGH MONEY TO LIVE COMFORTABLY FOR THE REST OF YOUR LIFE BUT CAN ONLY TAKE ONE VACATION PER YEAR, OR BE ABLE TO TRAVEL THE WORLD BUT HAVE AN UNSTABLE SOURCE OF INCOME?
Having a stable income would be super nice. I feel like traveling too much would be exhausting. So, I will take a steady income any day. Being comfortable is a must.

#18 WOULD YOU RATHER NEVER READ A BOOK AGAIN OR NEVER USE THE INTERNET AGAIN? (AND NO, YOU CAN'T CHEAT AND READ EBOOKS!!)
I could never give up books. Giving up the internet wouldn't be overly hard.

#20 WOULD YOU RATHER HAVE ALL YOUR DEBT FORGIVEN OR NEVER HAVE TO PAY ANY TAXES EVER AGAIN? (EXCLUDING THE INTEREST FROM AFOREMENTIONED DEBTS)
I would much rather have all my debt gone. The stress relief would be amazing.

IF YOU’RE TAGGED, THESE ARE THE QUESTIONS THAT I MADE FOR YOU TO ANSWER! (EVEN IF YOU’RE NOT TAGGED FEEL FREE TO ANSWER THEM ANYWAY)

#1 Would you rather have only vintage outfits to wear or only the latest newest trends?

#3 Would you rather have a couple of really close friends or a bunch of random acquaintances?

#4 Would you rather lose the ability to lie or believe everything you’re told?

#6 Would you rather have free Wi-Fi wherever you go or have free coffee where/whenever you want?

#7 Would you rather give up your love life or work life?

#8 Would you rather read minds or accurately predict the future?

#9 Would you rather have no taste buds or be color blind?

#10 Would you rather infinite battery life for your cell phone or infinite fuel for your car? 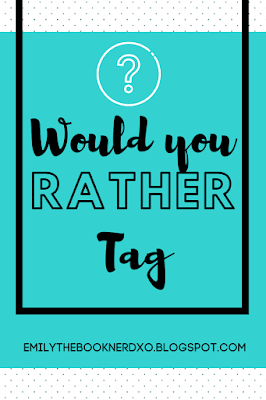