The Geek and the Goddess Book Blitz + Giveaway 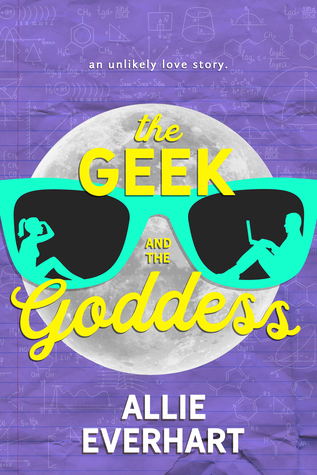 
People always say they wish they could predict the future. But not me. I already know my future. I’m going to lose my sight. I don’t know exactly when, but it’s going to happen. And it’s the reason I’ll never fall in love.
At least that’s what I thought. Until one day a guy walks into my chem class and changes all that.
I thought for sure he’d avoid me after he saw how people at school treat me. The teasing. The nicknames. Just being seen with me is enough to ruin his reputation, yet this guy still wanted to date me. And he wouldn’t take no for an answer.
That’s how it began. How it ended is not at all what I expected. Ours is an unlikely love story.

Goodreads / Amazon / Barnes & Noble
—
EXCERPT:
A guy appears at the door. He looks back at it, like he’s double-checking the room number, then says something to a girl up front. She nods and he closes the door.
Everyone looks up and stares at him. He’s tall and thin, wearing jeans and a button-up white shirt with a blue blazer over it. And he has on a tie that’s blue and green plaid.
Who dresses like that for class? A blazer and a tie? Maybe he transferred here from a prep school.
“Greetings, earthlings,” he says in a deep voice. He smiles and a few people chuckle.
“Wesley,” Mr. Henderson says. “Welcome.”
“Thank you,” he says in a cheery tone, not seeming to care that people are staring at him.
“We have a seat for you back here,” Henderson says.
He sees me and smiles. “Guess it’s my lucky day.”
Lucky day? What is he talking about?
Everyone watches as he makes his way to the back. As he approaches my table, I notice he’s carrying a briefcase. Like one of those hard covered briefcases men used to carry to work. He sets it down and opens the metal hinges. The briefcase pops open and inside is his laptop, a notebook, and some pens. He takes out the laptop, then closes the briefcase.
“Everyone, this is Wesley Deckle,” Mr. Henderson says. “He moved here last summer from Sacramento, California. Please welcome him to Wisconsin by introducing yourselves after class.” He walks over to his desk. “I want phones put away and books out. We’ll begin shortly.”
Wesley holds out his hand to me and smiles. “Hi. I’m Wesley. And you are?”
“Luna,” I say as I get a better look at his face. He’s kind of cute. His eyes are a swirly mix of blue that reminds me of those pictures of Earth taken from space. He has dark brown hair that’s a little long with curly waves that make it look messy but in a good way. And he has good skin. Not a single zit, which is rare for people our age.
“Luna,” he repeats, and I wait for him to follow that with whatever rude comment he’s going to make about my unusual name. But instead he says, “That’s the coolest name ever.”
I stare at him, skeptical of his words. It’s quite possible he’s being sarcastic. He looks like someone who uses sarcasm.
“Are you being serious?” I ask.
“Luna. Roman goddess of the moon,” he says, smiling. “You were named after a goddess. That’s cool, don’t you think?”
“Not really.” I look away from him. “I’ve never liked my name.”
“Why don’t you like it?”
“Let’s start by reviewing the syllabus,” Mr. Henderson says.
I open my laptop, not answering Wesley’s question. Because answering it means telling him the history of my name and how it’s been used to tease me, ridicule me, make me an outcast. There’s no need to explain all that. He’ll find that out soon enough.

Author Bio:
Allie Everhart writes romance and romantic suspense and is the author of the popular Jade Series, Kensington Series, Wheeler Brothers, and several standalone titles. She’s also a freelance health writer and has worked on several New York Times bestselling books. Allie's always been a romantic, as evidenced by her early years as a wedding singer, her obsession with dating shows, and the fact that she still watches reruns of The Love Boat. When she’s not writing, she’s outside running, which is when she gets her best book ideas.

By Emily Nicholas | Emily The Book Nerd at August 08, 2018
Email ThisBlogThis!Share to TwitterShare to FacebookShare to Pinterest
Tags Book Blitz