I Hate Fairyland, Vol. 1: Madly Ever After 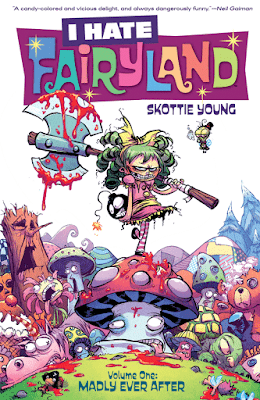 From superstar writer and artist Skottie Young (Rocket Raccoon, Wizard of OZ, Fortunately, The Milk), comes the first volume of an all-new series of adventure and mayhem. An Adventure Time/Alice in Wonderland-style epic that smashes its cute little face against grown-up, Tank Girl/Deadpool-esque violent madness. Follow Gert, a forty-year-old woman stuck in a six-year-old's body who has been trapped in the magical world of Fairyland for nearly thirty years. Join her and her giant battle-axe on a delightfully blood-soaked journey to see who will survive the girl who HATES FAIRYLAND.

A young girl gets trapped in a fantasy world for almost 30 years and just can't take it anymore.

Immediately, as I started reading this graphic novel... I could not stop laughing. Instead of cursing, the characters use very creative slurs. This is for sure an adult graphic novel. Do not let children read it. It contains foul language and a bunch of gore that I was not expecting. The illustrations were absolutely beautifully breathtaking. I will for sure be continuing on with the series because it left off with a huge cliffhanger that I was not expecting.

When Gertrude first gets to fairyland, she is told to find the key back home to her door. However, it's been almost 30 some years and she still hasn't found her way back home yet. She has grown into an adult that is stuck in her eight-year-old body. This graphic novel was absolutely hilarious. The whole concept was super unique and entertaining. I flew through this graphic novel and could not put it down.

The only reason why I didn't give it five stars is that it was almost a little too violent for my taste. There was a lot of murder in this short graphic novel. Some parts made me cringe. If you do not like anything violent then I wouldn't advise picking up this book. Overall, I laughed a ton and I am very glad I picked this one up. Skottie Young has been an illustrator and cartoonist for over ten years working for entertainment and publishing companies such Marvel, Warner Bros., Image, Upper Deck, Mattel, and many more. He is currently illustrating the New York Times Best Selling and Eisner Award Nominated adaptions of L. Frank Baum's OZ novels with writer Eric Shanower. The series has gained acclaim from both fans and critics. Skottie currently lives in Illinois with his family, Casey, Baxter and their Saint Bernard, Emma. 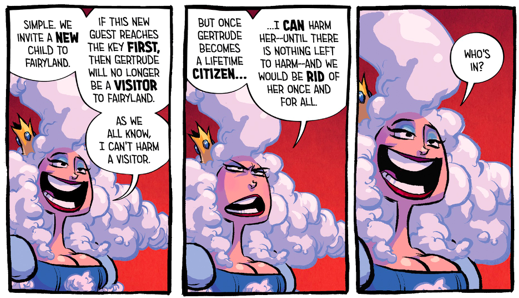