Must Read YA Books Without Romance 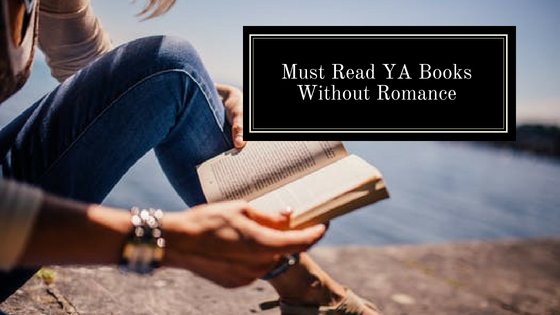 Lately, I have been reading a lot of YA books with cheesy fluffy romance or first love scenarios. Let me say finding a YA book that does not have a romance is hard to come by. But yes, they do in fact exist. As a single girl in my 20s, I am tired of reading about the romance period. At least for now anyway. I find myself getting annoyed very easily as I read the character's dialogue and watching them fall in love. I don't know maybe I am being more of a pessimist lately and just fed up with love in general.

The thing is I find most love stories unrealistic and I am just tired of reading them and I am tired of being sappy. Love is just out of the cards in my life currently and I am fine with that. I like being single. As far as my reading tastes, I am more in the mood for a book with substance these days. I know I am not in the minority here and there are other people like me out there. So I began searching on the internet to compile a list of "Must read YA books without romance." So next time that you or I are fed up with the damsel in distress scenarios or another "Notebook" love romance. We can turn to this list.

A Monster Calls by Patrick Ness
An unflinching, darkly funny, and deeply moving story of a boy, his seriously ill mother, and an unexpected monstrous visitor. At seven minutes past midnight, thirteen-year-old Conor wakes to find a monster outside his bedroom window. But it isn't the monster Conor's been expecting - he's been expecting the one from his nightmare, the nightmare he's had nearly every night since his mother started her treatments. The monster in his backyard is different. It's ancient. And wild. And it wants something from Conor. Something terrible and dangerous. It wants the truth.
BUY THE BOOK HERE

Beauty Queens by Libba Bray
When a plane crash strands thirteen teen beauty contestants on a mysterious island, they struggle to survive, to get along with one another, to combat the island's other diabolical occupants, and to learn their dance numbers in case they are rescued in time for the competition.
BUY THE BOOK HERE

Coraline by Neil Gaiman
The day after they moved in, Coraline went exploring... In Coraline's family's new flat are twenty-one windows and fourteen doors. Thirteen of the doors open and close. The fourteenth is locked, and on the other side is only a brick wall, until the day Coraline unlocks the door to find a passage to another flat in another house just like her own. Only it's different. At first, things seem marvelous in the other flat. The food is better. The toy box is filled with wind-up angels that flutter around the bedroom, books whose pictures writhe and crawl and shimmer, little dinosaur skulls that chatter their teeth. But there's another mother and another father, and they want Coraline to stay with them and be their little girl. They want to change her and never let her go. Other children are trapped there as well, lost souls behind the mirrors. Coraline is their only hope of rescue. She will have to fight with all her wits and all the tools she can find if she is to save the lost children, her ordinary life, and herself.
BUY THE BOOK HERE

The Hobbit by J.R.R. Tolkien
In a hole in the ground, there lived a hobbit. Not a nasty, dirty, wet hole, filled with the ends of worms and an oozy smell, nor yet a dry, bare, sandy hole with nothing in it to sit down on or to eat: it was a hobbit-hole, and that means comfort. Written for J.R.R. Tolkien’s own children, The Hobbit met with instant critical acclaim when it was first published in 1937. Now recognized as a timeless classic, this introduction to the hobbit Bilbo Baggins, the wizard Gandalf, Gollum, and the spectacular world of Middle-earth recounts of the adventures of a reluctant hero, a powerful and dangerous ring, and the cruel dragon Smaug the Magnificent.
BUY THE BOOK HERE
Forgive Me, Leonard Peacock by Matthew Quick
Today is Leonard Peacock’s birthday. It is also the day he hides a gun in his backpack. Because today is the day he will kill his former best friend, and then himself, with his grandfather’s P-38 pistol. But first he must say good-bye to the four people who matter most to him: his Humphrey Bogart-obsessed next-door neighbor, Walt; his classmate, Baback, a violin virtuoso; Lauren, the Christian homeschooler he has a crush on; and Herr Silverman, who teaches the high school’s class on the Holocaust. Speaking to each in turn, Leonard slowly reveals his secrets as the hours tick by and the moment of truth approaches. In this riveting look at a day in the life of a disturbed teenage boy, acclaimed author Matthew Quick unflinchingly examines the impossible choices that must be made and the light in us all that never goes out.
BUY THE BOOK HERE
The Giver by Lois Lowry
Twelve-year-old Jonas lives in a seemingly ideal world. Not until he is given his life assignment as the Receiver does he begin to understand the dark secrets behind this fragile community.
BUY THE BOOK HERE
This Savage Song by Victoria Schwab
There’s no such thing as safe in a city at war, a city overrun with monsters. In this dark urban fantasy from author Victoria Schwab, a young woman and a young man must choose whether to become heroes or villains—and friends or enemies—with the future of their home at stake. The first of two books. Kate Harker and August Flynn are the heirs to a divided city—a city where the violence has begun to breed actual monsters. All Kate wants is to be as ruthless as her father, who lets the monsters roam free and makes the humans pay for his protection. All August wants is to be human, as good-hearted as his own father, to play a bigger role in protecting the innocent—but he’s one of the monsters. One who can steal a soul with a simple strain of music. When the chance arises to keep an eye on Kate, who’s just been kicked out of her sixth boarding school and returned home, August jumps at it. But Kate discovers August’s secret, and after a failed assassination attempt the pair must flee for their lives.
BUY THE BOOK HERE
The Outsiders by SE Hinton
The Outsiders is about two weeks in the life of a 14-year-old boy. The novel tells the story of Ponyboy Curtis and his struggles with right and wrong in a society in which he believes that he is an outsider. According to Ponyboy, there are two kinds of people in the world: greasers and socs. A soc (short for "social") has money, can get away with just about anything, and has an attitude longer than a limousine. A greaser, on the other hand, always lives on the outside and needs to watch his back. Ponyboy is a greaser, and he's always been proud of it, even willing to rumble against a gang of socs for the sake of his fellow greasers--until one terrible night when his friend Johnny kills a soc. The murder gets under Ponyboy's skin, causing his bifurcated world to crumble and teaching him that pain feels the same whether a soc or a greaser.
BUY THE BOOK HERE
Code Name Verity By Elizabeth Wein
Oct. 11th, 1943 - A British spy plane crashes in Nazi-occupied France. Its pilot and passenger are best friends. One of the girls has a chance at survival. The other has lost the game before it's barely begun. When "Verity" is arrested by the Gestapo, she's sure she doesn't stand a chance. As a secret agent captured in enemy territory, she's living a spy's worst nightmare. Her Nazi interrogators give her a simple choice: reveal her mission or face a grisly execution. As she intricately weaves her confession, Verity uncovers her past, how she became friends with the pilot Maddie, and why she left Maddie in the wrecked fuselage of their plane. On each new scrap of paper, Verity battles for her life, confronting her views on courage and failure and her desperate hope to make it home. But will trading her secrets be enough to save her from the enemy? Harrowing and beautifully written, Elizabeth Wein creates a visceral read of danger, resolve, and survival that shows just how far true friends will go to save each other. Code Name Verity is an outstanding novel that will stick with you long after the last page.
BUY THE BOOK HERE

Between Shades of Gray by Ruta Sepetys
Lina is just like any other fifteen-year-old Lithuanian girl in 1941. She paints, she draws, she gets crushes on boys. Until one night when Soviet officers barge into her home, tearing her family from the comfortable life they've known. Separated from her father, forced onto a crowded and dirty train car, Lina, her mother, and her young brother slowly make their way north, crossing the Arctic Circle, to a work camp in the coldest reaches of Siberia. Here they are forced, under Stalin's orders, to dig for beets and fight for their lives under the cruelest of conditions. Lina finds solace in her art, meticulously--and at great risk--documenting events by drawing, hoping these messages will make their way to her father's prison camp to let him know they are still alive. It is a long and harrowing journey, spanning years and covering 6,500 miles, but it is through incredible strength, love, and hope that Lina ultimately survives. Between Shades of Gray is a novel that will steal your breath and capture your heart.
BUY THE BOOK HERE

Do you have any other young adult books you can think of that doesn't have any romance? Leave them in the comments below. I am always looking for more suggestions.

*All novel descriptions/summaries above were taken from Goodreads.*