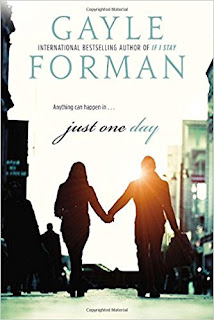 When sheltered American good girl Allyson "LuLu" Healey first meets laid-back Dutch actor Willem De Ruiter at an underground performance of Twelfth Night in England, there’s an undeniable spark. After just one day together, that spark bursts into a flame, or so it seems to Allyson, until the following morning, when she wakes up after a whirlwind day in Paris to discover that Willem has left. Over the next year, Allyson embarks on a journey to come to terms with the narrow confines of her life, and through Shakespeare, travel, and a quest for her almost-true-love, to break free of those confines.

Can you really fall in love in one day?

This novel was both a hit and miss with me. Some parts I absolutely loved, for example, the aspect of traveling through Europe, falling in love abroad in Paris, and many Shakespeare references. Not to mention the main character Allyson coming into her own person and standing up for herself and what she believes in. Pushing herself outside of her own comfort zone and learning how she wants to live her own life.

There were many times in this novel where I was so proud of Allyson and all the strides she was making in her own life. She saved up money to go back to Paris to find the guy she fell in love with and had the courage to finally stand up to her overbearing mother about not wanting to be a doctor and studying to be a pre-med. There were many parts that I did enjoy. However, I did not like her love interest. He was made out to be a playboy and I would find myself almost getting mad at Allyson for falling for him so quickly and allowing herself to enter into such a deep depression when their relationship did not work out.

I didn't like how the novel portrayed a girl that needed a guy to be happy. Allyson kept longing over this guy she barely even knew. After all, she had only spent one day with him. Yet she would rant about how much she loved him. I found it to be really annoying at times. All in all, this was a very average read for me. I didn't love it but I didn't hate it either. I give
Just One Day a solid three stars.

Award-winning author and journalist Gayle Forman has written several bestselling novels for young adults, including the Just One Series, I Was Here, Where She Went and the #1 New York Times bestseller If I Stay, which has been translated into more than 40 languages and in 2014 was adapted into a major motion picture.  Gayle published Leave Me, her first novel starring adults in 2016 and her latest novel, I Have Lost My Way, comes out in March of 2018.  Gayle lives with her husband and daughters in Brooklyn.